The Challenges of the World’s Food Systems

EU – Food, water and energy systems are becoming increasingly vulnerable: over the next 20 years the global demand for energy and water, is projected to rise by 40%. The food system, linked to population growth and lifestyle changes, is the most vulnerable of all and the global human demand is projected to grow by 70% until 2050 (FAO, 2009).

Even if agricultural production, is currently sufficient to meet food demand and at the global scale the growth rate of the population, one of the driving forces behind environmental problems, is less rapidly because of decreasing birth rates after 1965, the “total population size is nevertheless projected to increase from 7 billion people today to about 9 billion people by around 2050” (UN, 2009). The situation may worsen in coming years, because cultivated land area and arable land, absolutely essential to agriculture, decreasing by 1.5% per year, are decreased by 13% in the last 50 years. At the same time their productivity is increased by 259% and the effect of extensive farming systems is devastating the land and is against the well-being of the citizens.

Arable land scarcity is, globally, the result of human and climactic factors, such deforestation, desertification, irrigation and urban sprawl and according with Environmental Indicator Report 2013 published by the European Environment Agency’s (EEA), land degradation is not mainly associated with farming: comparison of degrading areas with global land use systems indicates that 47 per cent of degrading land is forest. The hardest hit are South Africa, Indo-China, Myanmar, Malaysia and Indonesia, central Australia, The Pampas, Swaths of the high-latitude forest belt in North America and Siberia, with different percentage of global degrading.

Global Land Assessment of Degradation published by the United Nations’ Food and Agricultural Organization (FAO), shows that the development of land degradation, defined as a long-term decline in ecosystem function, has 9 indicators interpreted on the basis of a Global Land Use Systems map. 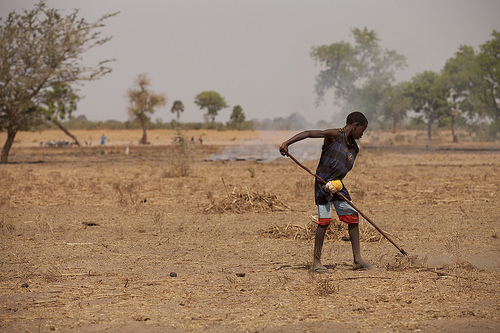 To produce food in sufficient quantities Europe, for example, relies on intensive agriculture which impacts the environment and our health but the current economy has led to a series of contradictions, including the production of a very expensive food, unsustainable farming practices, damage to biodiversity and water resources and large food waste in rich countries. Food provision is a key determinant of human health but associated with major impacts on land cover and also affects the quality of soils, water and air, but agriculture is an important economic sector and it is facing several challenges.

You need to know that land degradation is defined as a long-term decline in ecosystem function and degradation is driven only by its management or catastrophic natural phenomena. A long-term food security can probably deliver on the goal by reducing the overall ecological impact of agriculture with precision farming techniques (reducing fertilisers, pesticides) and with organic practices. We need to improve resource efficiency to conserve the natural environment and the services it provides to us, and the transition to a Green Economy is a key priority in the years ahead, ensuring food accessibility and protecting soil, water and biodiversity.

[Tweet “A green economy is a key priority to ensuring food justice #green #biodiversity #water #food justice #greenactionnews”]
Despite the green revolution started in 1968, world hunger has not been eradicated, almost a billion people live in hunger or malnutrition. The current economy has led to a series of contradictions, including the production of a very expensive food, unsustainable farming practices, damage to biodiversity and water resources and large food waste in rich countries. We need additional efficiency in all the system, transport, retail and consumption, we need to guarantee consistently three elements: food availability, access to food and food utilization. Organic Agriculture, for example, is a production system that sustains the health of soils, is a step towards the Green Economy, offering an environmentally friendly and sustainable production system, by re-vitalizing the farm and food sector.

Ybele Hoogeveen, of the European Environmental Agency (EEA), said : “There is a strong link between our health and well-being and food. Agriculture also contributes to climate change and air and water pollution, all of which may affect human health and well-being indirectly. The way we produce our food affects the attractiveness of the landscape we live in. A switch to low-productive systems would be unrealistic and counterproductive. We can’t afford farming to be inefficient, economically nor environmentally. At the same time, we need to reduce the pollution from agriculture. This poses a dilemma. Organic farming, an added value for the farmer, (without pesticides and fertilisers) can also be intensive, but is estimated to yield roughly 20 % less than intensive agriculture. To continue producing the same amount of food, we would then need to allocate more land to agriculture”.

I'm a journalist who has studied architecture or an architect who writes. I've a Master's Degree in History and Philosophy and a Master's Degree in Architecture. I developed my expertise is in Energy Saving, International Environmental Law, Urban Planning and Sustainable Water Management. As an architect I trust in sustainable living, as a historian in human development and in cooperation.