Activists used paragliders, climbers, inflatables and a small fleet of boats in what they call “a serious attempt” to keep the Gazprom tanker Mikhail Ulyanov from carrying out its oily agenda, rather than a stage-managed media event, despite a boat full of journalists trailing after the action and the port being given advanced warning of a protest.

Seven of the 44 arrested were part of the “Arctic 30,” too, including captain Peter Willcox. 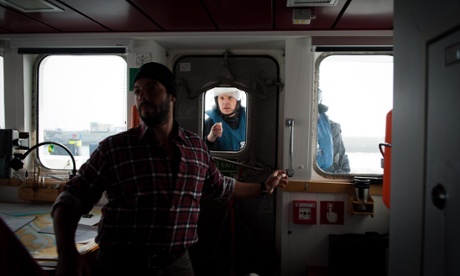 Naturally this latest event is being compared to the last, when Russian navy commandos aggressively boarded Greenpeace’s Arctic Sunrise icebreaker last September, guns drawn, and towed it a couple hundred miles to Murmansk where 28 activists and two journalists were jailed for more than two months on hooliganism and piracy charges. Whereas, in Rotterdam, the 44 activists were brought to various police stations and the Rainbow Warrior was towed ashore. The ship and 43 of the 44 activists were released with fines “between €90 and €130” within a few hours without any pending charges. The 44th activist (kept in custody for further questioning) is a 30-year-old German who intentionally sailed his boat into a police vessel. According to police reports, he currently awaits a hearing.

Willcox, the 61-year-old captain of the Rainbow Warrior, has been accused of ignoring traffic channel rules and not following instructions. Measures against Willcox will be taken at a later time by the Public Prosecution Authority.

It tells us more about how the authorities deal with dissent in Holland compared to Russia. We had every intention of stopping the oil being offloaded. The intention was just as serious as it was in Russia last September.

Faiza Oulahsen from the Netherlands, who participated in both protests, said:

Thirty of us went to prison for shining a light on this dangerous Arctic oil, and we refuse to be intimidated. This tanker is the first sign of a reckless new push to exploit the Arctic, a place of incredible beauty which is melting before our eyes. I stand with 5 million others against those who put short-term profit above the common interests of humanity.

Greenpeace International is pushing to end offshore drilling for Arctic oil not only in Russia, but all over the world. The organization is appropriately critical of the oil and gas giants such as Shell and BP, as well as their ventures with Russian energy firms and ambitious intentions in the Arctic.

It’s increasingly clear that our reliance on oil and gas is a major threat not just to the environment, but to global security. Arctic oil represents a dangerous new form of dependence on Russia’s state-owned energy giants at the very moment when we should be breaking free of their influence. We cannot hope for any kind of ethical foreign policy while our governments remain hopelessly dependent on companies like BP, Shell and Gazprom.

Unfortunately, in the end the Mikhail Ulyanov reached port and prepared to deliver the goods, suggesting hardly a ripple was made in the oil fields for all their efforts — business continues as usual and the Arctic remains as of yet at risk.

Russia still holds the Arctic Sunrise to this day.